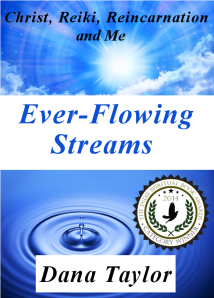 Back in 2010, Ever-Flowing Streams: Christ, Reiki, Reincarnation and me was the original title of the book currently called Ever-Flowing Streams: Tapping into Healing Energy. While I felt the first title more accurately captured the spirit of the book, I changed it in deference to my husband (now deceased) who considered “Christ” and “Reincarnation” associated together an insult to his faith. In the ensuing years, the greatest feedback I’ve received about the book has been from people in the Christian church thanking me for giving them “permission” to maintain a faith in Jesus and yet embrace a philosophy of reincarnation.

Since I’m on the brink of releasing a companion book, Supernal Adventures, I feel it’s time to repackage Ever-Flowing Streams and restore the original title. There’s a whole chapter devoted to the controversy regarding reincarnation. Here is a snippet, revealing some history. As it turns out, many early church theologians and followers believed reincarnation to be the way of the human experience.

Great minds and mystics have grappled with the theory of reincarnation for eons. The modern Christian church dismisses the concept. The party line is that we are born once; we have the option of accepting Jesus Christ as our Lord and Savior for our ticket to heaven; if we don’t, we are condemned to hell. This interpretation of scripture promotes church membership quite effectively.

But looking historically and globally, I found that reincarnation has been embraced by cultures far and wide. Even the Bible retains passages that allude to it. Besides the reference above from Matthew naming John the Baptist and Elijah as the same soul, Jesus seemed to convey the concept in several references:

Luke 9:18-20–“Who do the people say that I am?” And they answered, “John the Baptist; but others say Elijah; and others, that one of the old prophets has risen.”

John 9:2—As he went along, he saw a man blind from birth. His disciples asked him, “Rabbi, who sinned, this man or his parents, that he was born blind?”

If you take the above passages at face value, it appears there was a cultural acceptance of the idea that souls return to the earthly plane. Clearly, the people of the time exhibited a belief in reincarnation if they conjectured Jesus might be the returning spirits of Elijah or an Old Testament prophet.

Theologians have argued these passages for two thousand years. One of the earliest and most respected was Origen of Alexandria who lived from 185-254 A.D. According to the Internet Encyclopedia of Philosophy, he believed in the “pre-existence and fall of souls; multiple ages and transmigration of souls; and the eventual restoration of all souls to a state of dynamic perfection in proximity to the godhead.” Quite the metaphysician, Origen. He devoted his life to teaching and writing his Christian beliefs until the Roman Emperor of the day ordered a purging of the followers of Christ. Origen was martyred in Tyre.

The debate continued for another two hundred years until the church grew into a political institution. According to Life Between Life by Joel L. Whitton, Ph. D, “The new Church-State alliance, aiming for the cultivated dependence of the masses, felt threatened by those who believed in rebirth because such Christians tended to be self-reliant, free-thinking individuals whose subservience could not be guaranteed.”

In 553 A.D., the Fifth Ecumenical Council condemned Origen’s theories as heresy (the root definition meaning “able to choose”).  Emperor Justinian formally denounced the concept of rebirth in no uncertain terms:

If anyone assert the fabulous pre-existence of souls and shall assert the monstrous restoration which follows from it: let him be anathema

Wow–let him be anathema– as in a “person or thing accursed or consigned to damnation or destruction.”

Zealous church leaders followed up that dictate by slaughtering a half million reincarnation-believing Cathars in Southern France during the 1200’s. Not satisfied with that carnage, the Inquisition was born.

Carol Bowman sums up the legacy of such repression in Children’s Past Lives thus:

The murderous efficiency of the Inquisition proved effective. The persecution by the institutional Church has scarred our collective psyche, and it has surrounded us with an invisible fence dividing what is safe from what is dangerous to believe. Since then, people who harbor forbidden ideas have learned to keep their thoughts to themselves. Our cultural memory still carries the fear of reprisal for publicly associating with any occult practices, the use of psychic powers or a belief in reincarnation.

Consequently, believers in reincarnation were effectively wiped out or muzzled. In time, the masses of the West generally forgot about it. The day-to-day struggle to survive and the poor education of the eras erased reincarnation concept from cultural memory. “

I’m happy to be living in a modern culture where my ideas can be expressed without fear of torture and death by church and government officials. Indeed, the content of the soon-to-be-released Supernal Adventures would have had me burning at a stake in a earlier era.

If you haven’t read, Ever-Flowing Streams, I invite you to check it out, in its current incarnation. I hope it will intrigue you to find out what happened next in Supernal Adventures–coming soon! 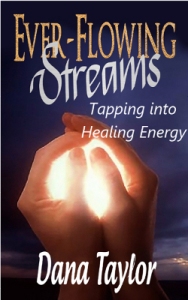 Available in the Kindle Store at Amazon and paperback at Lulu.com