Matthew Perry’s new sitcom, Go On, centers on a recently widowed man trying to get on with his life after the death of his wife. He joins a quirky support group and they become a soul-family struggling together through life’s challenges. Over the course of the last two months, my life has taken on a Go On theme, with my own little cast of quirky characters nudging me along life’s twisted path. 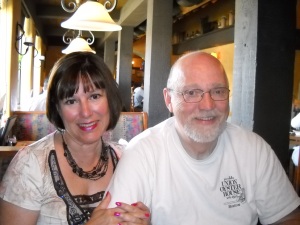 On February 11, 2013 I received a phone call informing me that, my husband, David Taylor, had died in a car accident at 12:36 pm on I-35 in Oklahoma City. Shocking.  And yet, not really a surprise. You see, I’d sensed his days were short, I just hadn’t known how or when his passing would occur.

Leading a supernal life sometimes opens awareness to information of unfolding events. By last fall, David had a strong sense of his imminent departure. Life circumstances and choices had resulted in the two of us living in separate states during the past couple of years. We saw each other as often as possible, usually converging in yet another state to see our daughters also. We talked often and had conquered skype. Our family gathered together last Thanksgiving and I thought that would be it for our holiday visit. But one day after going to separate gates at the airport, he booked a flight to see me for two weeks at Christmas.

He seemed to be tying up loose ends. He personally purchased toys and books for grand kids and his grand nephews and mailed them off—himself. He arrived in LA with all his tax information ready to assemble and worked on it between Christmas and New Years to leave with me. We drove an hour and half to see his sister who’d moved back to California, something we’d only done once before.

We talked, really talked. Those last two weeks were probably the most compatible, no axes-to-grind, easy-going days of our 36 year marriage. I sensed it was our last Christmas together. We never came right out and said it, but I think we both felt it.

We took day trips—to a classic Craftsman home in Pasadena (for him), a show at the Los Angeles Music Center (for me), lunch at Seal Beach (for us). We rented movies and ate. Oh yes, we enjoyed his favorite, not-good-for-you foods. He bought a ham– a big, juicy one. Christmas goodies and candies? Sure, why not? I let all my healthy living rules slide and I’m so glad I did. We made love, and I’m glad we did that, too.

I’m grateful I didn’t realize dropping him off at the LAX airport would be the last time I would see him. I’ve been through wrenching goodbyes and I prefer, “See you soon,” even if you won’t.

During the first week of February our daughter, Cary, had a dream about her Dad, that she couldn’t quite recall, but left her with the impression she needed to call him. The urge hung over her like a cloud for three days before she finally talked to him.  On Sat. February 9, she told David how glad she was that he had been her Dad and how much she loved him. He reflected on the blessings of his life, counting me as one of them, and the many years we’d shared together. How wonderful that our daughter could have such a significant final conversation with her father.

The morning of February 11 was busy for David. He had a court hearing; he did some work for a client; he went to the bank. He needed to be in Norman, OK at 1 pm for his mother’s surgery at the hospital. He spoke briefly to me and to our other daughter, Sara. The last thing he did before getting on the freeway was drop a Valentine in the mail to me.

Poorly marked road construction would lead to his accident. The off ramp he needed to take to the hospital was closed and he was trapped. When he tried to get back into busy traffic, he veered into a large cone, over-corrected, hit the guard wall and was then hit by a SUV. He perished immediately. Eight hours later, his best friend found my cell phone number and called me.

The people we love, never really leave us. They stay tied to our hearts, live in our memories, and continue in another dimension on their soul journey.

As for me, I am like Matt Perry’s character. It’s time to Go On.–Dana Taylor

6 comments on “On My Husband’s Passing”