Gary Holz, D.Sc. (1950-2007), was an award-winning physicist and a psycho-neuro-immunologist. In 1994, confined to a wheelchair with multiple sclerosis, he went to Australia to stay with an Aboriginal tribe and experienced miraculous healing. Robbie Holz is a holistic health consultant dedicated to continuing the healing work of her late husband. She healed herself of hepatitis C and has also worked with Aboriginal healers in Australia.

I first became aware of Robbie Holz through an interview on the Open Minds show on Gaia TV. Ms. Holz spoke about her life with healer, Gary Holz, and the incredible journey they had both experienced with debilitating diseases. Intrigued by her interview, I purchased both books, Secrets of Aboriginal Healing: A Physicist’s Journey with a Remote Australian Tribe and Aboriginal Secrets of Awakening. 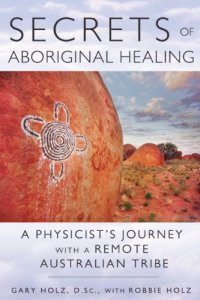 The first book, Secrets of Aboriginal Healing, is Gary’s story. His life as a scientist and successful businessman came to what appeared to be a tragic end when he developed multiple sclerosis. From the description:

In 1983 award-winning physicist Gary Holz was diagnosed with chronic progressive multiple sclerosis. By 1988 he was a quadriplegic. Then, in 1994, his doctors told him he had two years to live. Desperate and depressed, he followed a synchronistic suggestion and went to Australia to live with a remote Aboriginal tribe. Arriving in a wheelchair, alone, with almost no feeling left from the neck down, Holz embarked on a remarkable healing transformation of body, mind, and spirit and discovered his own gift for healing others.

Written at the request of the Aboriginal healers Holz worked with, this book reveals the beliefs and principles of the 60,000-year-old healing system of the Aborigines of Australia, the world’s oldest continuous culture. Chronicling the step-by-step process that led to his miraculous recovery, he explains the role played by thought in the creation of health or disease and details the five essential steps in the Aboriginal healing process. He explores the use of dreamtime, spirit guides, and telepathy to discover and reprogram the subconscious motivations behind illness–a process that enacts healing at the cellular and the soul level, where the root of physical illness is found.

As I read Gary’s story, I wanted to pass it on to people I know dealing with chronic illness who don’t understand the connection between buried emotions, unforgiveness, and disease. Gary had to travel all the way to the Outback of Australia to recognize what had been hiding in his heart.

Aboriginal Secrets of Awakening is Robbie’s story. The title is a little misleading because the book is largely about her healing from hepatitis C and her love story with Gary. She does make a trip to Australia meeting with Indigenous healers, but that isn’t the heart of the story. Meeting Gary, loving Gary, losing Gary, carrying on for Gary is the essence of the book. While it doesn’t have the revelations of the first book, it still “tells the rest of the story.” It’s a testimony to healing and love.

Both of these books offer insights on healing that are rarely, if ever, discussed in a doctor’s office. They point the way to overcoming despair and powerlessness given a devastating diagnosis. Healing is a process of mind, body, and spirit.

If you or someone you know is dealing with a “hopeless” situation, offer these books. They may be the spark of light out of the darkness.