If you’ve read my Supernal Series books, Ever-Flowing Streams and Supernal Adventures, you’re familiar with my “Supernal Friends,” Sue, Paula, and Helen. We’ve traveled the highways and byways of spiritual adventure, exploring Reiki, past lives, multidimensional living and more. Each of us have various talents–clairaudience, medical intuition, mediumship, psychic connections. Though we now are scattered between three states and over 5,000 miles, we come together via Skype for prayer, meditation, and friendship. Our “Supernal Sessions” often render intriguing spirit connections and insights.

Last weekend Paula was in the spirit communication mode. My seemingly ever-present Grandma Rose popped in. Paula saw her standing holding a scraggly dog, no doubt the beloved Molly.

She said, “Oh, baby. Oh sweetheart. You are so good with your new babies. They have a spark of you within them.” This made me smile. I’m spending most of my mornings right now with 5-month-old Aliyah and 3-year-old Noah. Aliyah’s soulful brown eyes remind me often of her Great-Great Grandma Rose.

The more intriguing connection Paula mentioned concerned Sue. Paula said, “There is a male with you. He’s somebody you only met a couple of times. He is patting you on the back, like ‘good job.’ He’s a friend of someone you know who recently passed very suddenly. He’s helping that person adjust to the other side. He wants you to know your prayers have helped. The friend went very quickly. No pain. He wants people to know he is fine.”

At first Sue had no idea who Paula was talking about. Then, she remembered. A former co-worker named Anthony died of a stroke while performing music a couple of months ago. He was only about 50 years old. Sue was shocked and saddened to hear about it.

Sue has a heart for praying for people after they die. She feels strongly that they need support transitioning to the other side. Indeed, when she heard of Anthony’s sudden passing, she devoted time to praying for him.  In Western culture, we don’t place much importance on praying for souls who have passed. Despite a lot of talk about going to heaven, many people regard death as The End. According to many Christian doctrines, if a person hasn’t accepted Jesus Christ as their Lord and Savior, they are destined to eternal damnation. Catholic traditions are a bit more broad-minded, offering prayers for the dead. Other cultures have a larger understanding of soul survival and incorporate praying for the departed and ancestors into their traditions. 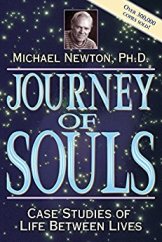 In modern times, the most fascinating glimpse of what happens beyond death can be found in the work of Dr. Michael Newton as chronicled in his landmark books, Journey of Souls and Destiny of Souls. Regressing clients through hypnosis, he discovered memories of “life between life.” From Journey of Souls:

All souls, regardless of experience, eventually arrive at a central port in the spirit world which I call the staging area. Once past the orientation station there seems to be no further travel detours for anyone entering this space of the spirit world. Apparently, large numbers of returning souls are conveyed in a spiritual form of mass transit. Spirits are brought in, collected, and then projected out to their proper final destinations similar to a central terminal of a metropolitan airport that has the capacity to fly people out in any direction. The most outstanding characteristic of this world is a continuous feeling of a powerful mental force directing everything in uncanny harmony. People say this is a place of pure thought. After souls arrive back into their soul groups, they are summoned to appear before a Council of Elders. While the Council is not prosecutorial, they do engage in direct examination of a soul’s activities before returning them to their groups. Group placement is determined by soul level. After physical death, a soul’s journey back home ends with debarkation into the space reserved for their own colony, as long as they are not a very young soul or isolated for other reasons. The souls represented in these cluster groups are intimate old friends who have the same awareness level. Members of the same cluster group are closely united for all eternity. These tightly-knit clusters are often composed of like-minded souls with common objectives which they continually work out with each other. Usually they choose lives together as relatives and close friends during their incarnations on Earth.

It’s been many years since I read Dr. Newton’s books, but they left an indelible impression. Life goes on and on. Dr. Newton was definitely a man of science. Questions about the power of prayer are not mentioned in his books. He never considers asking his clients anything about faith or religious practices. Yet, he presents a very definite picture of a structured after life. But the question is never asked: do our prayers cross the boundaries of physical and non-physical realms?

Eastern religions, shamanic traditions, and metaphysics would suggest the power of intention, prayer, and love has power beyond the earthly realm. Our Supernal Sessions have touched on this more than once. During an Akashic record reading from Helen, my own dear Grandma Rose chided me, “It wouldn’t hurt you to light a candle and say a prayer for me once in a while.” A few months after his passing, my husband, David, came through and thanked Sue for praying for him. I’ve witnessed Paula help confused souls to follow the Light and leave their earth-bound limbo.

Last week’s encounter with Anthony’s friend further leads me to believe the power of prayer for departed friends and family is more than wishful thinking. Just as I’ve seen the energy of intention intensify healing of physical bodies, it appears prayers carry healing energy to non-physical entities also.

How it all works, I don’t know. As the Apostle Paul said, “We look through the mirror darkly.” Yet, these moments of spirit communication offer intriguing insights into the after life. My takeaway is prayers put loving energy into action. Time spent in prayer may be the most important part of the day.