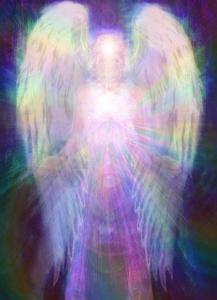 I’ve been a bit quiet here lately for a variety of reasons, but a major one has been adjusting to a new energy that came in during the once-in-a-century lunar eclipse in January 2018. This business of multidimensional living has many surprises. Truly, I’m not sure what happened, but it felt like I was zapped by a major attunement. I was exhausted the week of the eclipse and the top chakra in my head felt wide open. Ever since I received The Reconnection attunement at an Eric Pearl event twelve years ago, my body adjusts to the new frequencies with jerking bursts of energy from the solar plexus. Often when I’m sending healing energy, I experience many quaking moments. They range from mild to significant. On a scale of 1-10, the post-eclipse energy bursts were an 8. Very strong and somewhat alarming.

Beyond that, my intuitive abilities seem heightened. Images and information from multidimensional sources are flowing more frequently and catching me off guard. The most amusing incident was when I was getting a facial. The salon owner, Connie, is an animal lover and we discussed her dogs as she worked her magic on me. In my mind’s eye I kept seeing a colored bird. It wouldn’t go away.

“Yes, I do, a wonderful canary. It has a red head and a white and yellow body.” She proceeded to tell me how she pampers this birdie with all sorts of special foods. Suddenly, I sensed the personality of this little guy. He projected the image of a bell. I saw him pecking his bell. I asked Connie if the bird had a bell in his cage and she couldn’t recall one. Then she pulled out her phone and scrolled through her pictures until she found him in his cage, next to a bell.

At that point it seemed important to ask, “What’s the bird’s name?”

“Oh,” she said, looking a little surprised. “His name is Jingle Bell.”

So, Jingle Bell the bird sent me pictures of a bell to tell me his name!

And that’s just one thing that has happened.

I’ve also felt the presence more closely of my spiritual “team” or angels. Nudges and instructions, detailed information when I’m sending healing energy. Last week a friend was having a tough night before heading to the hospital for major surgery in the morning. I hunkered down to send her calming, healing energy. Soon, I felt the cool presence of my healing angel to my right. I’ve been told her name is Asaniel. Once Asaniel showed up, an energy wave rolled over me. I was quaking, chanting, and buzzing. Wow! My friend was able to rest on and off during the night after that.

In the midst of all this, I felt led to listen to ANGELS IN MY HAIR by Lorna Byrne.

I’d never heard of Lorna until she popped up on Facebook and snagged my attention. The documentary on her life is very interesting. Coming from very humble beginnings in Ireland and living a uniquely mystical life, Lorna became a celebrity in the UK and Europe after the publication of her autobiography.

Born in the 1950’s, Lorna was considered the “slow” child in her family. She grew up seeing angels, but never told anyone about them for fear of being institutionalized. Some family members labeled her “retarded,” and her parents stopped sending her to school when she was 14. She often wandered off on her own, spending hours with her angelic companions, receiving a heavenly education.

She led what looked like a mundane and challenging life. She and her husband had limited educations and struggled to keep food on the table for their family. The angels gave her a vision early on of her husband and the poor health he would endure during their marriage. Seeing heavenly messengers is no guarantee of an easy life. Ask Joan of Arc or Bernadette of Lourdes.

Angels were Lorna’s best friends and mentors. Archangel Michael showed up quite often, along with other regulars. She also perceived energy fields and the occasional deceased human. Lorna’s narrative relates not only her personal life, but also the struggles of her native Ireland and the culture of her kinsmen. While many of her tales push well beyond the boundaries of ordinary “normal” people, she illustrates the interaction between humans and angels. Humans have free will and dominion over the earth plane. Angels offer assistance and guidance, but are often “unemployed” and ignored by their human charges.

The ultimate point of the book is that God and angels love humanity and are reaching out to us in multidimensional ways. Lorna imparts wisdom and insights from her experience as she continues her life path. Listening to her story has been calming during this time of personal transition. I’m certainly no Lorna Byrne with angels making themselves visible in my living room. Yet, her story allows me to feel a bit more comfortable in my “new normal” of knowing things and sensing guidance from multidimensional sources.

ANGELS IN MY HAIR is an engaging tale for the mystical minded. Say hello to your guardian angel and you may be surprised when you receive an answer back.